In recent years, food consumption has shifted to rice in Sub-Sahara Africa where it is the largest source of calories and fastest growing cereal. This is particularly strategic in West Africa where the increasing preference and demand for rice far outstrips the supply that is possible from domestic production. This will likely persist as a result of increased urbanization, population growth and a weak systemic linkage among the actors and relevant stakeholders in the rice value chain. The local production of rice in the ECOWAS region meets only 60% of current demand; in part because the yield growth of 1.03% per annum in the last five years (2013-2017) does not match the population growth rate of 2.73% per annum in the same period (ECOAGRIS).

The shortfall in supply has been compensated for through massive imports from Asia, an increasing trend observed to have only reduced in the past four years because of the various efforts carried out across the region. To this end, the cost of importing rice does not only remain a heavy burden on trade balances in the sub region, but also depletes the scarce foreign reserves and undermines indigenous capabilities in the production of rice and its value chain.

West Africa's inability to reach self-sufficiency in rice is the result of several major constraints in the rice value chain which require urgent redress to stem the trend of over-reliance on imports. As a result, the Regional Offensive for Sustainable and Sustained Recovery of Rice Production in West Africa was adopted by the ECOWAS Council of Ministers in 2014. This is a key mechanism put in place to revamp rice production and significantly reduce rice importation by the year 2025 in the region. At the country levels, the 2nd Generation of the National Rice Development Strategies are under preparation in the ECOWAS Member States, and many of them are putting restrictions on the importation of rice to enable the development of the local rice value chains.

Hence, this “ECOWAS Rice Fact book” shows evidences, summary of progress and ongoing initiatives in the rice sector and highlights the need to accelerate investment in ECOWAS for the continued development of the Rice Value Chain. These facts should be considered, carefully analyzed and used as a guide to ensure that the “rice offensive” contributes to the regional agricultural transformation. This fact book has benefited from the collaborative effort of Grow Africa and Alliance for a Green Revolution in Africa (AGRA) who provided the background and Competitive African Rice Initiative (CARI) who provided support for its production.

Call for bidders for Technical Assistance to ECOWAS Commission in Strengthening the Regional Strategic Food Reserve and Responsiveness
11/03/2021 - 17:00
Open and competitive call for proposals for community-based forest / land management demonstration initiatives
11/04/2021 - 23:59
Call for expression of interest for the Study of identification of partnerships OPA-research and diagnostic centers of extension and support-advice structures.
15/03/2021 - 17:00

END_OF_DOCUMENT_TOKEN_TO_BE_REPLACED 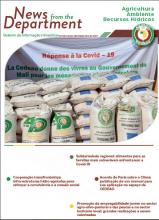